Handy Tools I Use

This started as a simple post to an internal Slack group. Then I got asked to post it to another channel in that Slack. Then I decided to post it to the DevRel Collective Slack. At which point I was asked to make it a blog post so it didn’t get lost in the scroll-back (DevRel Collective uses a free Slack account, so we can only scroll back 10,000 messages. With 2,000+ members, that happens faster than you think. But I digress.)

I do a lot of development in Go. I really never thought I would, but if you’ve read this or this or this you’ll see that I’ve gotten sucked in. (Another brief digression. Yes, I’ve heard of Rust. It’s the next language on my list. Give me a minute.)

Go has become my go-to language because I now know how to do stuff in it quickly. It’s also easy to run cross-platform so I can develop on my Mac, and deploy on Linux and it Just Works™.

In most of my work with Go, I’m dealing with data in json and configuration files in yaml or toml most of the time, so finding tools to make dealing with that data easier is always welcomed!

There’s a bonus-tool at the end, if you read the whole thing.

In dealing with JSON, in Go, there are 3 common things I have to do all the time:

So I validate the JSON first using jasonlint. Paste in your json object and it will immediately tell you if what you’ve got on your hands is, in fact, a valid JSON object.

Go has some rally handy ways to deal with JSON objects that make it my go-to for JSON Data. If you’re given a JSON object, say from querying a website for data via an API, you can use

And the data will be unmarshalled into your data structure. But, and it’s a big but, you have to have a datastructure that exactly matches your incoming data.

And that’s where json-to-go comes in. Take your validated JSON object, past it in on the left side, and out of the right side comes a valid Go data structure to hold it.

I’ve run that through the JSON linter, and it’s valid. Great. Now, a Go Structure to hold it:

And now I can write some Go code:

And myStruct will be a properly filled out data structure with the data from my incoming JSON object.

Which brings me to the third thing I do: Accessing specific fields of a JSON object.

With our simple JSON structure above this wouldn’t be a difficult problem for the most part. Want the work address?

and you’re there. But what if your JSON object is massively complicated?

And that’s not even complex in comparisson to some I deal with regularly, but for argument’s sake, lets say it is. And let’s say you want to get the second type out of the address_component that, in the above example, is the city, “Mountain View”. Well, the results is actually an array, though in the above example it only has one element. If the array had lots of elements and you wanted the result of the 3rd item in the array, it gets a little harder.

This is where json selector comes in. Paste your JSON object in (that we already know is valid, because you validated it, right?) and then just click on what you want.

Oh heavens! There is is! It’s the first element in the results array, it’s the address_components field, and the third element in that array, and it’s the second element of the types array!

And that is a complete toolset for dealing with JSON object. But wait, I mentioned yaml and I haven’t talked about it yet!

Correct! And thanks for paying attention!

YAML: Yet Another Markup Language. Because what the world needs is more markup languages. But yaml is super useful for configuration files. I use yaml-based config files for all sorts of stuff. The configuration file for building this whole website is a yaml file.

So being able to properly parse and deal with a yaml file is important.

Again, with Go, it’s relatively straighforward. My first tool is yaml2go. Just like json-to-go, it will take your yaml file structure and turn it into Go data structures.

And get yourself some spiffy Go code:

And then you can unmarshall your config file:

And deal with your configuration variables from there. When you’re done, if you want to write out your config.yaml file (you know, if your running program changed any startup parameters), you can write it all out after marshalling it:

This one has saved my bacon on more than one occassion. Because I really, *really suck at writing Regular Expressions (RegEx). Like, really. I"m terrible at it. So terrible at it that until I found this tooll I would write 30 lines of Go code to about a single call to a regex.

Enter RegEx101. I cannot even begin to say how brilliant this tool is. Let me explain.

You may (or may not) notice that this website is translated into a bunch of languages. I don’t speak any of them. I don’t write any of them. But I do write Go. So, using Go and google’s translate APIs, I can automatically translate any post here into whatever language(s) I want.

But the translate API does some seriously messed up things with parts of a Markdown file. So I had to compensate. URLs are a great example. If my blog-post.md file has a link in it [my link](https://my.link) then Google Translate will happily translate [my link], which I want, then add a space between ] (, which I don’t want, and then (sometimes) translate the path components of the link, which I defienitely do not want.

So I had to compensate, as I said. At first, I did this manually, and it was a real mess. It was error-prone and hard to maintain. But then I found RexEx101 and everything changed.

I could do this:

And then it even explains what the varoius parts of the regex do! 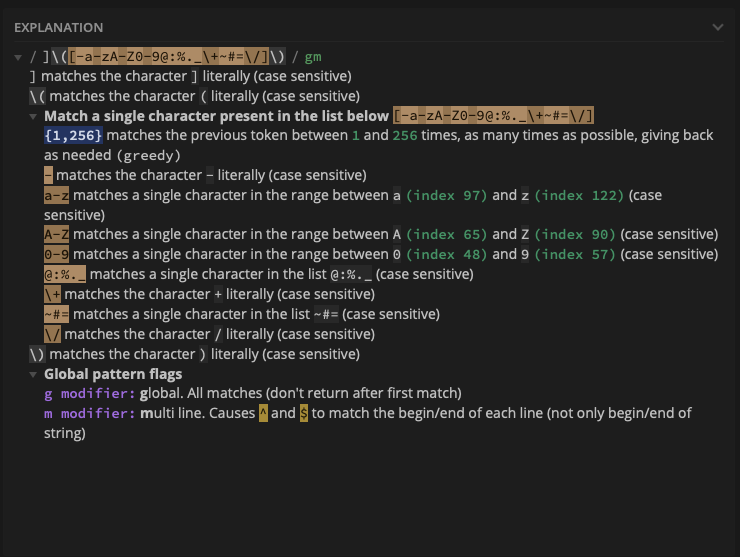 So then I can have my Go program find all the URLs in a given piece of text, and then after the text is translated, replace all the ] (messed/up/urls) with ](original/url)

I could also use it to find the other end:

And it always helpfully explains what it’s doing: 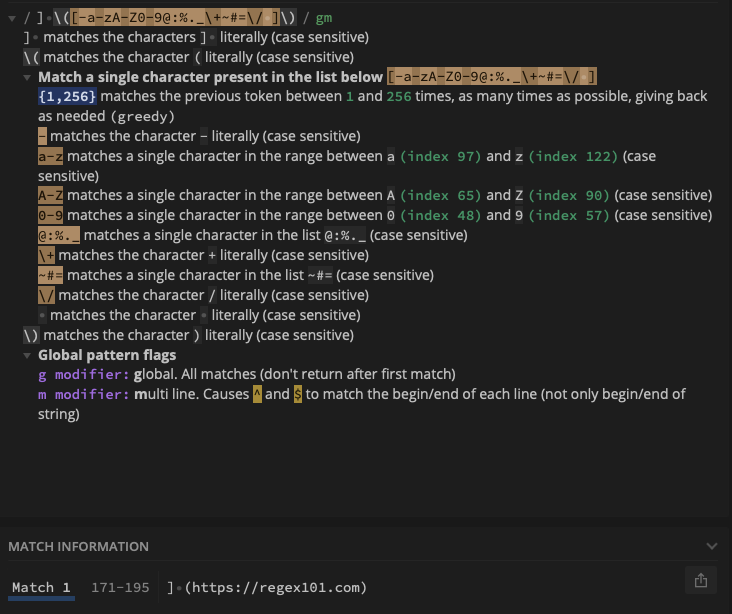 Oh my! I could also fix the other stuff that Google Trnaslate messes up, like bold text **bold** becomes ** bold ** which isn’t bold anymore. But with this:

Brilliant. Becaues I never would have been able to write those Regular Expressions without serious help!

I hope you found these tools as helpful as I do. I really do use them on a near-daily basis for the work I do. I have them pinned as tabs in my browser so they are always open and easy to find.

If you know of other tools, please do let me know! And don’t forget to follow me on Twitter!

Improve this page
Prev
Dealing With Me
Next
Ok, So Test-Driven Development is a Thing