Here's Why I'm giving up on MyNewt (for now) 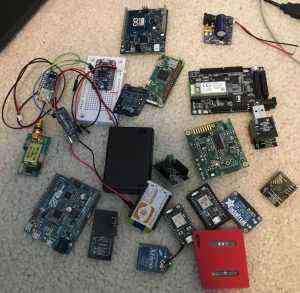 With all these sensors and platforms lying around, I wanted to just pick one and build a quick sensor demo. It should be easy, right?

As you may (or may not) know, I spent a lot of time with the Apache MyNewt project a year or so ago. It has enormous potential. It’s small, fast, and very lightweight. I even wrote a tutorial on developing an app with MyNewt. I’m sure this post is going to annoy the good folks working on that project, but that is surely not my intention.

In developing a new demo for my new-ish job, I have been having problems with the stability of the Arduino Bluetooth stack. I decided that maybe MyNewt was a better route for this particular device, so I began trying to develop the app for MyNewt. Here’s why I’m giving up.

This is a dead-simple app. It does 3 things:

Simple. In Arduino, there is an I2C library, “Wire” library, and I can simply do a Wire.begintransmission(0x68) — the I2C address of the device — then Wire.write() as many bytes as I want, then Wire.endtransmission() and the write to the I2C device is done. Likewise, I can read from an I2C device’s registers with a Wire.requestFrom(I2CAddr, len) and get back the number of bytes I requested from the I2C Device address requested. Simple. Clean.

Unfortunately, in MyNewt, I pretty much have to start from scratch and build complex data structures, then figure out how to initialize them correctly, Here’s the “example” from another I2C sensor:

Notice that the “data_struct” takes the address out of the “sensor interface” structure, but then I have to pass them both to the i2c_master_write() call. I fooled around with this for a few days trying to adapt it to the sensor I have — and my sensor is much more simple — I simply write 4 bytes to the proper I2C address, then read back 4 bytes.

Here’s the entirety of the code required in Arduino:

I’ll spare you the 3+ pages of C code in MyNewt it takes to get anywhere close to doing this. And then there’s the Bluetooth stack, and implementing a series of event handlers, etc. to deal with events, etc. It’s literally almost 1,000 lines of code (the main.c file is over 500 lines).

And this, I think, is the problem with MyNewt. In the year+ since I was involved it hasn’t evolved to be any more user-friendly. It remains deeply mired in the weeds. If what you want to do is write highly board-specific code that is not really reusable, and requires a very deep knowledge of the underlying hardware, RTOS, libraries, etc. then MyNewt is for you. If, on the other hand, you’re a developer that simply wants to get stuff done, it just isn’t. I would love to be able to use MyNewt for this demo. I really would. I think it has great potential, and it’s come a long way in its short lifetime. But in order for it to gain traction with a wider developer audience — like, say, the Arduino crowd — it’s going to have to start making things a lot easier for would-be developers.

Abstraction libraries — like Arduino’s Wire library — and wrapper libraries around the Bluetooth NimBLE libraries, etc. are a necessity I really do hope I can come back to MyNewt again and develop this demo app quickly. I just don’t have the time right now to dig around and write very low-level, board-specific, code in order to make this demo work. I’ll just have to continue to work around the bugs in Arduino.