As I said earlier, when you have a hammer … So I decided to set up Yet Another IoT Gateway. This time I took a look at OpenHAB the “vendor and technology agnostic open source automation software for your home.” Why not, right? I’ve already set up a Droplit.io edge server, and an Eclipse Kura server, so why not give one more a try right? Right. So let’s dive in.

Setup was incredibly easy. Almost scary easy. Seriously. As always, I started with the basic ARTIK Fedora image, and of course updated it with all the latest:

That takes a while.

Note: I start with a fresh OS for each of these projects. Thanks to being able to dump a running system back out to mini-SD Card, I just dump what I was working on to a card, burn a fresh card, and start over.

You’re going to need that Zulu JVM I talked about earlier. Installation is quick and easy, but don’t skip it! Apparently the open-jdk version of the JVM won’t really give you much joy with OpenHAB. I didn’t try it, I just installed the Zulu JVM and went on. In case you forgot, once you’ve downloaded the Zulu JVM

The only additional package you are going to need is unzip because someone thought it was a good idea to not include unzip (or zip for that matter) in the base image. Whatever.

Easy. Done. Then get the openHAB server. The instructions for this install are here, but really I’ll tell you everything you need to know.

The instructions say to create an openhab user, and then run the openhab server as that user. Don’t do that. I guess you can figure out how, but when I did, I kept getting:

So finally I just ran it as root. It works just fine as root.

That’s really all there was too it! Told you it was easy!

This is where things got fun! Once the OpenHAB server was started, I connected to the ARTIK-520 using my browser (port 8080, just FYI) and Voilà! I had a dashboard of sorts. But nothing was there. Hmmm … okay, so I had to go install some “bindings”.

There are a lot of them.  I chose the ones for the stuff I have. A Samsung TV, some Nest Stuff and those Wemo switches. As soon as I installed those bindings, stuff started showing up in my “Inbox”. Like, instantly! What showed up right away were the Wemo switches. As soon as I fixed the network connection on my Samsung TV, it also showed up right away. The Nest stuff is going to take a bit more work since I had to register as a Nest Developer, and I haven’t finished jumping through all their hoops just yet.  But the bindings are installed:

I installed the Z-Wave binging for reasons that now escape me. Deal with it. 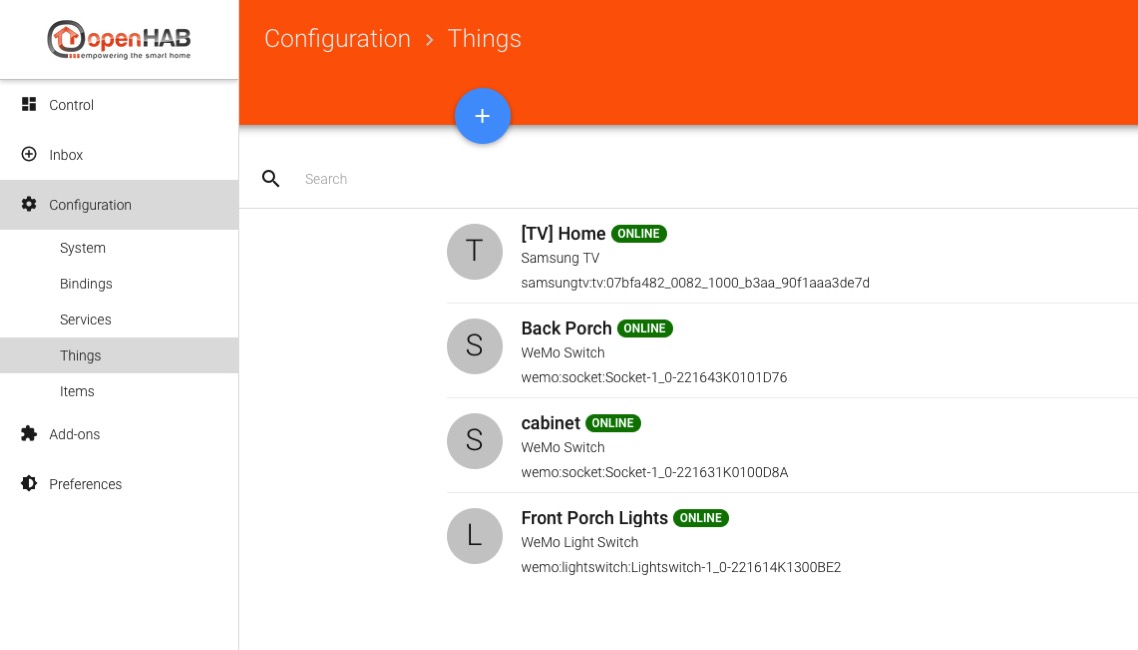 And those are all the devices that appeared. And now I can control them!

The Kura Server took me a week or two to get working, with a fair amount of support from the Eclipse engineers responsible. It really wasn’t designed to run on an embedded platform like the ARTIK-520, and had never been tested there, so it’s not really surprising.

The Droplit.io Edge Server took me about a week. Actually, the install was pretty easy once I gave up on trying to build the system on the ARTIK-520. Remember my rule: Don’t build/compile on ARTIK-520 unless absolutely necessary. Then it took a few days to get a bug worked out so it could find my Wemo switches, but that’s about all it was going to find.

The openHAB server was by far the easiest. Took about 2 hours, start to finish, including building/flashing/updating the OS. And it found a lot more devices almost instantly (once I figured out to install the bindings. I don’t always read all the directions.). It’s very responsive and easy to deal with.

I’ve got a bunch more stuff to investigate here, like the ‘experimental’ rules engine, and I may try out the Text-to-Speech integration if I have time.

In all honesty, this may be my last ARTIK-520 integration test for a while. They aren’t actually paying me to do them. In fact, no one is paying me to do anything right now, so until I get that fixed, I’ll probably spend most of my time job-hunting. And maybe some more time on the resistbot project. This is all easily fixable if someone would decide to hire me. :-)

Improve this page
Prev
ARTIK-520 as a Droplit.io Edge Device
Next
Coffee Beans