I should have posted this back in October, but a few things happened. So I’m posting it now.

I saw a few articles on the Spark.io board a while back, and had been anxiously awaiting its release. Then I got really really busy, and forgot all about it. Then I got unbusy again, and lo and behold, it was now called particle.io, and they had a few different boards. The Photon and the Electron. (Neat names, by the way!) Well, not being terribly busy, I bought a Photon.

It’s hard to tell from the pictures on the website just how small these boards really are! So I have provided that picture up there. And that’s MANIFEST.in the box!!**

So here’s one of it out of the box: 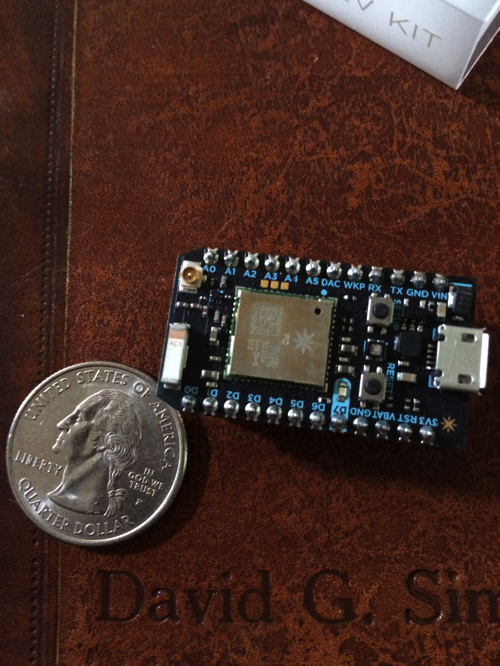 Yes, that’s really how small it is.

I will say that it powered up, and I was able to configure it, just as the directions said, in just a minute or two. Very easy to get the board up and on the ‘net. Nice iPhone interface for configuration, etc.

Now for the bad news. I can’t hack this thing directly. It’s all based on a web-based development environment where you write your code on the web, then have Particle send the app over the internet to your device. This seems to be an increasingly popular model. electric imp is doing the same thing. Maybe I’m just old and cranky and used to doing things the way I’ve always done them, but I prefer to have more control over, and access to, my devices. We’ll have to see if I can be brought to heel on this point.

All of that being said, I haven’t actually written my first app yet. Julie keeps complaining about having to turn out the light at night, so maybe I’ll go get a nice large MOSFET and a proximity sensor and build her a remote switch for her lamp. We’ll have to see what I can come up with.